The craft has been honed, and ji-biru is booming. If you haven’t already, it’s time to sit up and take notice of “the beer of the land.”...

Sacrilege as it may seem, this was apparently the first impression of the Tokugawa Shogunate after tasting beer for the first time when the Dutch brought it to Edo as part of a tribute in 1727. The statement was published at the time in the Dutch record, Oranda Mondo (Discussions with the Hollanders).

No one could have predicted the meteoric rise of beer in Japan and that indeed, its main players would all be Japanese brands. A scene that even today it is still on the up and up with the new breed of craft beer – ji-biru – that has been gaining momentum in leaps and bounds.

Ji-biru, which literally translates to “beer of the land” is what we would associate with “craft beer” or “micro beer” in the West. These days, the term kurafuto biru is also used to distinguish between the high-quality beers produced after the birth of craft beer in Japan from the not-so-highquality stuff.

Japanese craft beer proliferated after a strict minimum-brewing law in place from 1908 was relaxed. The law stipulated that in order to have a brewing license, a brewer had to produce 180,000 liters a year. This was lifted in 1940 to 1.8 million liters, and raised again to two million in 1959, making it impossible for anyone to get into the brewing game that wasn’t already established.

All this finally changed in 1994 when a new law lowered the minimum brewing capacity to 60,000 liters a year. This catalyzed the craft beer movement in Japan, but it was a case of first comes quantity, and much later comes quality.

“The overwhelming positive was that you had craft beer, but this explosion of microbrewing led to more than 400 microbreweries popping up all over Japan – most in the simple hope of making a big profit rather than any real desire to make well-crafted beer,” explained Mark Meli, a regular contributor to Japan Beer Times magazine and the author of Craft Beer in Japan – the definitive English guide to all things Japanese craft beer.

Everyone and their obachan was getting into the ji-biru business; restaurants, hotels, museums, you name it. “Today we have about 240 craft beer breweries in Japan, a lot of the others closed because the beer was terrible,” Meli said.

The Scene in Kansai

Since about 2012, craft beer bars have been mushrooming throughout Kansai with new places continuously popping up. The craft haunts with a bit of a longer history, like Qbrick, which just celebrated its 10-year anniversary, and Beer Belly, opened after the Minoh beer brand was launched in 1996, have blazed the trail, helping to pave the ji-biru landscape and build the now fast-growing scene.

“Kansai has a really strong community for craft beer … part of that is having so many (craft beer bars) in the same area,” says Mike Post, also known as Mr. Beer Zen, the founder of the quarterly Beer Zen magazine. Having just celebrated its two-year anniversary, the magazine has also been instrumental in driving the scene with its simple goal: “to connect people to people, and of course people to great beer!”

“The scene has steadily grown with a big boom in 2012 with Yellow Ape, Molto, Craft Beer Base, and Kamikaze opening and another big boom this past March with a lot of owners opening their second shops,” Post explained.

As far as what is driving the scene, the craft beer culture is more in line with a “foodie” culture, which is reflected in the chic atmosphere and mouthwatering food served at these places. This might also explain why the patrons differ from what one usually expects, particularly in a Western country, when ‘heading out to the pub for a pint.’

“Women drive the scene to a certain degree. They know what’s cool, what’s going on. There is a misconception that beer is a man’s drink in the West, but everyone likes beer!” explained Post.

It’s not limited to women just knowing what’s happening in the scene either – they are also brewing the beer. “More than half the brewers in Kansai are women,” said Mark Meli. They are drinking it, making it and running the bars that sell it.

Probably the most renowned in Kansai craft beer, Minoh brewery was founded in 1996 when a successful liquor store owner named Masaji Ohshita established the brewery and charged his three daughters with running the place. Ever since, the Ohshita sisters have been concocting some very tasty brews that have won them many Japanese and International awards.

Having traveled around Europe to learn from the best, Ai also acts as a judge in Japan and abroad for international beer competitions. Developing a refined palate to match her keen business mind, she is a growing force on the ji-biru movement locally and abroad.

The Future of the Scene 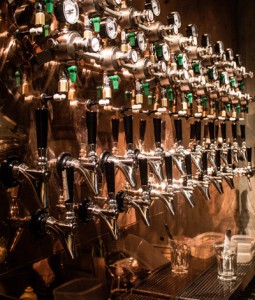 While future of the general scene looks bright, it still has a long way to go. “Right now, it’s not a destination for breweries, but if you like craft beer and you visit you will be pleasantly surprised with what’s on offer,” said Mike Post.

There used to be more of a focus on German-style beers in Japan’s craft beer scene, but the trend has now shifted towards American styles. Mark Meli explained that “a tidal wave of American craft beer has come in and the companies with the most success, with some exceptions, are doing American styles.” The popularity of American craft beer in Japan has inspired many breweries to be bolder with their use of hops, and IPAs are becoming a more fashionable style; a stark contrast to the lagers turned out by the big four.

As for the obstacles holding back craft beer locally, one is price – at ¥1,000 a pint, due in part to heavy taxes and the need to import hops, double the standard draft beer price tag is enough to chase people away.

Another factor is the availability of craft beer to regular local watering holes. Izakaya are usually under contract with one of the big four brewers, and as result, only carry their beer, but Meli thinks it will change. “I’d like to see it in izakayas and I think it will happen. Ten years ago in the States you had to look for it, now you can find it in gas stations.”

In Japan there is such a close tie between beer and food that Maek Post believes a key way forward is understanding pairings between the two. “As Japanese people learn an IPA goes well with this and a Stout goes well with that, craft beer will become more popular … that’s part of the marketing,” he said.

While the shop boom in Kansai has been spreading craft beer culture and sales, it is a niche market, making up about one percent of the total market in Japan. However, that hasn’t stopped the major Japanese brands from seeing the potential money in it. They too have thrown their hats in the ring, hoping to cash in on the budding popularity with all four major breweries rolling out craft beer lines.

The craft beer scene in Kansai has dramatically changed from just a few pubs 10 years ago to more than 50 craft beer spots currently, the majority being in Osaka. With Minoh beer still going strong, and promising up-and-coming players such as the Kyoto Brewing Company turning heads at craft beer festivals around the region, there’s no better time than now to get out there and see what all the hype is about.