WABORI: GETTING UNDER THE SKIN

Wabori: Getting Under the Skin

Hori Hiro is one of a handful of old-style Japanese tattoo artists preserving the art of wabori – a time-honored and often misunderstood tradition that may be in danger of being lost...

A rhythmic clicking sound known as shakki cuts into the silence of the room, “sha,” “sha,” “sha,” as the needle tips from the hand-carved persimmonwood bachi (traditional rod with needles) lightly pierce and raise the flesh to inject ink into the skin. The customer remains motionless with an expression somewhere between concentration and relaxation, seemingly in a meditative-like state. The artist executing his craft is Hori Hiro, a horishi (trained artist – “Hori” means to dig or engrave, and “shi” is an honorific term) who specializes in the mesmerizing art of wabori (traditional Japanese tattoo), also known as irezumi. It is an art form with a rich and complex history that is often misunderstood and unappreciated in Japan. Hailing from Kansai, with more than 30 years experience, Hori Hiro is one of a handful of lineage-trained masters left today who still practice tebori (hand carving).

Coming from humble beginnings, Hori Hiro was out on his own from the time he was 17 years old. He made a living in various ways including playing pachinko and Mahjong, until by chance, he met his calling. When he was 27, he went with a friend to watch him get an irezumi, and while watching the tattoo artist he thought, “I really want to try this.” Soon he began his apprenticeship under a sixth-generation wabori master, Horimitsu-sensei, and became part of the Horimitsu tattoo family, the oldest group in Osaka dating back to the Edo period.

An apprenticeship like this usually lasts between five and 10 years, and out of 10 who take on an apprenticeship, perhaps one will become a true wabori master. Day and night, Hori Hiro thought about his craft, striving for perfection, constantly thinking of ways to improve his skill. The complexity of the art became all-consuming for him. It was due to this unwavering dedication, mixed with raw talent, that Hori Hiro quickly surpassed his peers and gained his sensei’s acknowledgement. After just two years, he was able to open his own shop in Osaka, and in 1983, business was booming. During this period, Hori Hiro tattooed countless yakuza around Japan, constantly being sought out for his expert craftsmanship.

The situation dramatically changed in 2008 with the revisal of the Anti-Bouryokudan (another term for yakuza) law, which saw a crackdown on yakuza activities. Because of this, his main client base was not getting inked like they used to, causing Hori Hiro’s business to suffer.

“Ninety-eight percent of my clients were yakuza at that time, among them they called me the number one tattoo artist in Osaka. Now I hardly tattoo any yakuza at all.” 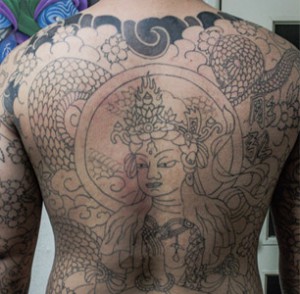 These days, Hori Hiro’s clients are those who are simply fascinated by the art and appreciate the traditional style. He still carves his own bachi tools and mixes his own organic sumi ink, which he gets from a shop in Nara that is more than 400 years old. Much like the tattoo shops of old, he has no sign outside his premises and operates out of his home. But he doesn’t rely on word-of-mouth alone. He has adapted with the times, using facebook and the Internet to bring in new customers. He has also had to adapt his artwork somewhat in order to keep with the times.

“The technique is the same – it is very important to keep the old style. But you have to change with the times; fashion, colors, sizes, etc.”

Hori Hiro is well versed in both wabori and more Western styles, which he can outline with a tattoo gun. However, all shading is done traditionally with a bachi tool which, explains Hori Hiro, gives the tattoo “color that is much more vibrant and will stay that way for 10 to 20 years.” Smaller pieces can be done in a few hours starting at around ¥20,000.

“The world looks at it and thinks it’s art. Most Japanese people don’t see that – they see only a bad image.”

Throughout Japanese history, tattoos have been complicated cultural symbols used for various purposes such as religious talismans, to mark prisoners (bokkei), to signify membership to a subculture, and as an expression of fashion. During the Edo period (1600–1867) tattoos were prominent across various areas of Japan. 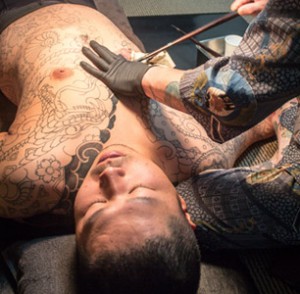 In the 19th century the Chinese fantasy novel Water Margin, which was translated into Japanese and color prints, set the Edo-era people’s imaginations on fire. The flames were fanned by the famous ukiyo-e artist Utagawa Kuniyoshi’s woodblock series The Popular 108 Heroes of The Water Margin, which had a tremendous impact on tattoos, helping to spark the rise of the flamboyant full-body tattoo, and interlinked the two art forms of ukiyo-e and irezumi. Both ukiyo-e artists and tattoo artists use the title “horishi”. Both require immense talent, dedication, and perseverance. Amunewari soushinbori (full-body tattoo with an opening on the chest) takes over 200 hours and costs upwards of five million yen.

The irony is not lost on Hori Hiro that the rest of the world sees wabori for what it is, a truly unique and beautiful Japanese art form, “The world looks at it and thinks it’s art. Most Japanese people don’t see that – they see only a bad image.”

It was all triggered when Japan began to open up more to the West. The Japanese were worried about how they would be perceived, and thought that Westerners would view their tattoos as barbaric. The Meiji government encouraged people to wear Western clothes, banned samuraitopknots, and in 1872, declared tattoos illegal, thus making it synonymous with criminality. On the contrary, however, the West was fascinated by this unique art. Sailors in the port would see rickshaw drivers with beautiful designs and want to get inked in their style. The Japanese called the sailors’ tattoos “sushi” due to their simple and crude design in comparison. 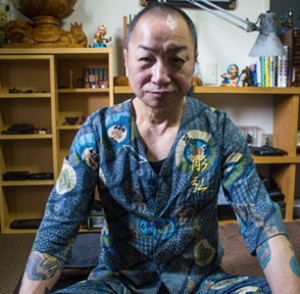 But it wasn’t just the laymen who wanted irezumi. Several British Royals – the second son of Queen Victoria, Prince Alfred; Prince Albert Victor; Prince George; King George V; and Prince Arthur of Connaught – were all tattooed in Japan. Other players on the world history stage to receive tattoos in Japan include Austrian Archduke Franz Ferdinand, whose assassination in 1914 sparked World War I, and Nicholas II, the last czar of Russia. It wasn’t until after WWII in 1948 that the ban on tattoos was lifted by the Western occupying forces, but by that time the damage was done, and tattoos were associated with the underbelly of Japan. “Young tattoo artists do not understand traditional style, they don’t think it’s important – it’s a big problem. I can’t live forever I want to teach this technique to younger generations but it’s difficult,” says Hori Hiro.

Whether or not wabori will ever receive the recognition of ukiyo-e, remains to be seen. Would the Japanese in general feel differently about their traditional tattoo art if they learned about its history and understood that they altered their own perception of tattoo culture out of fear of judgment from the outside world? Perhaps in time they will re-examine this, and not let outdated thinking relegate an important cultural art to obscurity.